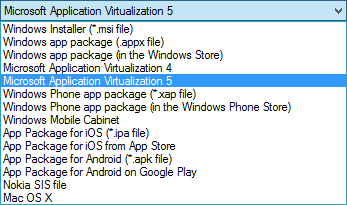 It has been a while since I wrote about my top 10 new features of ConfigMgr 2012 Service Pack 1. Have been busy with setting up our new User Group (WMUG NL), preparing presentations, writing other blogs and contributing to the upcoming book of Kent Agerlund (System Center 2012 SP1 Configuration Manager: Mastering the Fundamentals). Busy times between working and all other hobbies 😉 Let’s finish this blog series with my number 10 in the list of new features, the support of App-V 5.0. With R2 coming up lot’s of new features can be added to a new top 10, so stay tuned 😉

ConfigMgr 2012 RTM had already an App-V 4.6 SP2 Deployment Type that allowed you to download or stream the App-V packages from your distribution points to your local clients. Now in SP1 App-V 5.0, the successor of 4.6, is now also supported. The App-V 5.0 client is a fairly heavy and lots of prerequisites need to be in place before you are able to install it. Quick tip if you want to deploy the App-V 5 Client and don’t want to find out how to deploy the client yourself, have look at The Knack, they did a great job and have created and exported an application with the dependencies for App-V 5 in place.

App-V Application with all dependencies

So when can we use the Virtual Environments in ConfigMgr 2012 SP1? I think it was at TechEd last year that during breakout session a demo was show where the following scenarios were shown;

In scenario 1 you are not able to edit the Visio drawing from the Word document and in scenario 2 you are able to edit the embedded drawing. If you ask me a good scenario to rebuild in my lab environment. 🙂 You can also use it when for instance if you want to sequence browser pugins or addons of other applications.

In my lab environment I sequenced Microsoft Word 2010 and Microsoft Visio 2010 and added them as separate applications to ConfigMgr 2012 SP1. 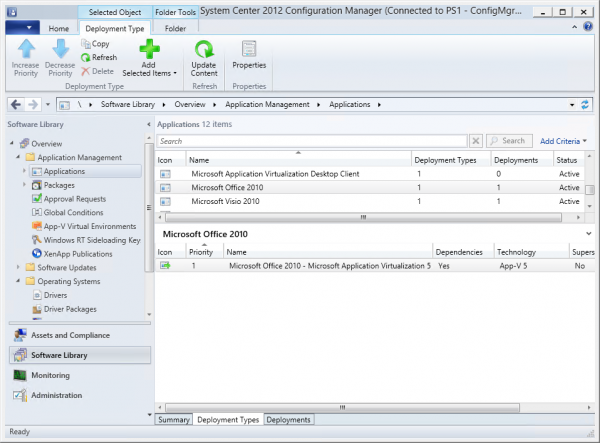 So when starting the app-v version of Office 2010 and opening the Word document with the embedded Visio 2010 drawing you see that the object is recognized as a Visio Drawing Object and that you are able to convert it, but edit it.

Even with both virtual apps installed you are not able to edit the embedded Visio object. What you need to do is to create a Virtual Environment (Connection Group) where you add the Microsoft Office 2010 and Microsoft Visio 2010 application with the App-V 5 Deployment Types.

Both Office and Visio are available

After the Virtual Environment is created and the local App-V client discovered it we are able to select Edit when right-click the embedded Visio drawing object. 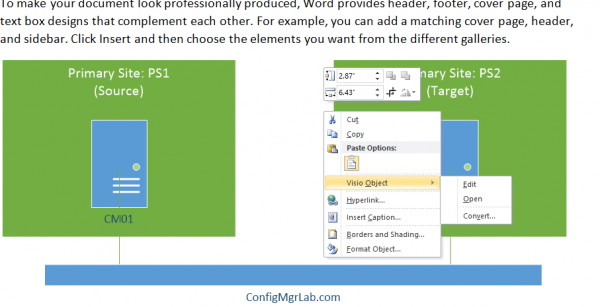 Hey we are able to select Edit 🙂

After selecting Edit you are able to change the Visio Drawing in the Word document ad save it. 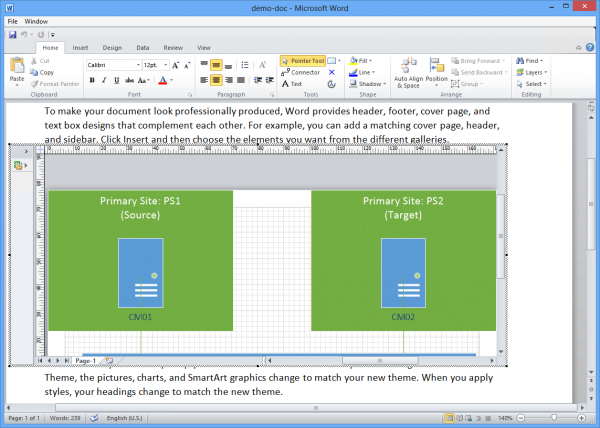 Another really cool new feature if you ask me, you can find more blogs in this series here: