Alerting can be found in the Monitoring Workspace of the Configuration Manager 2012 console. The you find some standard alerts that probably never have been triggered before. For every site you will find the following alerts: 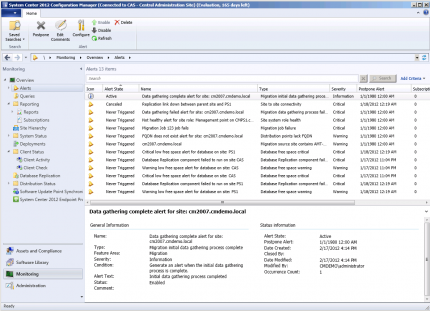 In the General Information part of the screen you are able to find a description of the alert, the following information can be found: Severity, Condition, Type, Alert State, Postpone Alter, Date Created, Closed By, Date Modified, Occurrence count.

As you see in the figure some alerts have a “Never triggered” state. Each alert can have the following states:

In RC2 and also in RTM there will be no reporting to email addresses for common alerts generated by Configuration Manager 2012. Hopefully there will be the ability to report alerts to emails in Service Pack 1 of Configuration Manager 2012. For alerts regarding Endpoint Protection are reported via email to definable subscribers, like explained in an earlier blog about Endpoint Protection. 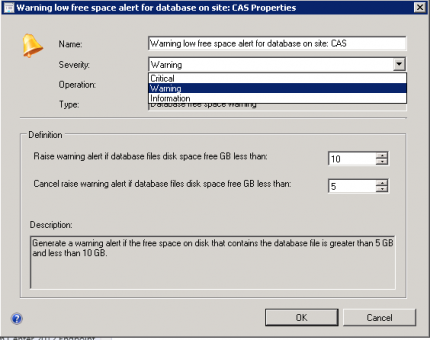 Change the severity of the alert and change the thresholds

Alerts can be set on different objects in Configuration Manager, the following list will give you some objects where you can configure alerting: 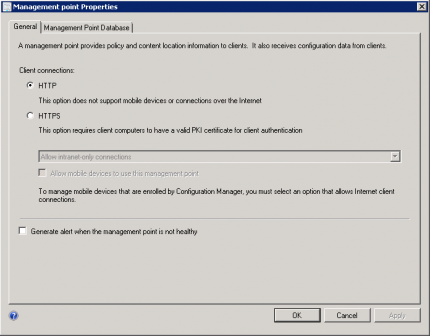 Configure alrting for a Management Point

For several objects or processes you are not able to configure alerts, but will be reported in the active reports list in the reports node when something happens. For instance:

For every alert you are able to edit or add your own comments for a selected alert. Till next blog, it may have some monitoring content, depending of the latest Configuration Manager news. 😉