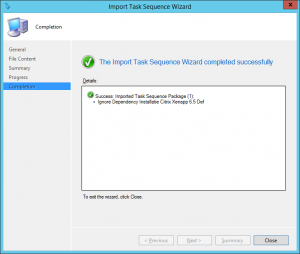 Next you need to copy the ZIP file to a share that can be accessed from the new Configuration Manager 2012 R2 Console and go to the Overview >> Operating Systems >> Task Sequences node in the Software Library workspace and click on Import Taks Sequence.

You will see that there will be an import failure, since one or more dependencies are missing. When choosing Ignore Dependency you will be able to import the task sequence successfully.

To finish up, be sure to configure the right Boot Image on the Task Sequence Properties since this is information is not imported.

Just another way when you need to migrate an MDT based Task Sequence.

Speaking at events in the next two months

In the next two months I will be speaking at several conferences and a user group meeting, time…

Apple is slightly changing how preferences are stored. For instance, until Mac OS X Mountain Lion the background…