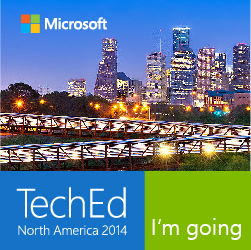 Next Saturday I will be flying from Amsterdam to Houston to be able to attend TechEd North America. Normally I would be attending the Microsoft Management Summit but since it is merged with TechEd North America it will be the place to be next week. Besides attending breakout sessions I will be assisting Wally Mead during four of his Instructor Lead Labs.

Like you probilby know Wally, Mister Configuration Manager has left Microsoft and joined Cireson, so if you want to say hi to Wally and maybe me be sure to join one of the Instructor Lead Labs sessions! 😉

The week in Houston will be packed with interesting sessions where very much can be learned and of course lots of networking and meeting my peers from around the world.

Like mentioned on Twitter I am able to sign and give away 25 Mastering System Center 2012 R2 Configuration Manager books thanks to Sybex. I will schedule a date and time together with Rod Trent that we will give away the books at the Myitforum Lounge. So be sure to follow me on Twitter and keep an eye on this blog 😉

My schedule for the week is a subject to change but looks at the moment like below;

I will be attending the Houston Area Systems Management User Group meeting on Friday, during this TechEd 2014 Day 5 event several Microsoft MVP’s, Wally Mead and Michael Niehaus will be presenting sessions in two System Center tracks. Would be a fun day after lots of sessions during TechEd itself.

See ya in Houston!

@pdaalmans
1K Following
5K Followers
So awesome to be back at #MMSMOA! I will leave my crutches at home :) Join me an many other great minds this May at… https://t.co/72EKhUp1uL
4 days ago
Follow

Months and months of writing and hard work, even during my holidays, is almost paying off! The editing…

Speaking together with Greg Ramsey at IT/Dev Connections