To keep all the members of the CEP interested, the setup of the sessions will be changed. In the first half of the session Jeff Wettlaufer will interview one of the engineers of the Configuration Manager team and highlight the changes in the beta 2 version. The second half of the session will be the slide deck, questions and demos. This session is still in the old format.

SCCM 2007 was fully optimized for Systems Management scenarios. Managing users in SCCM 2007 was a big challenge, the relation of users and the device or platform is always a hassle. SCCM will be System and User-centric: 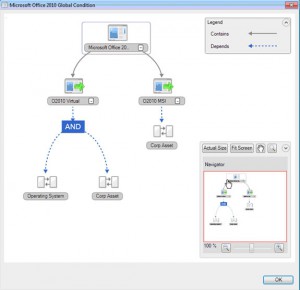 User Centric OS DeploymentSupport for new software distribution features during operating system deployment. Via requirement rules, dependencies and supersedence applications for a user can be installed during the OS Deployment. Via User Device Affinity support applications can be deployed to the primary user of a device or system.

The software Catalog in beta2 is enhanced and customizable so you can create your own logo’s and house style. The user can define work hours and new is the presentation mode. If the system is in Presentation Mode, deployments are suspended and baloon popups are suppressed.

Role-Based Administration is SCCM 2012 has become mature. SCCM 2012 brings us 14 out of the box security roles. As an administrator you can create as much as roles as you like. Assigning roles to people will remove clutter from the console, since it supports “Show me what’s relevant to me” based on Security Role and Scope.

The new SCCM 2007R3 Power Management feature will also be available in SCCM 2012.

Is back 🙂 With the SMS 2003 version of remote control there was a “big security leak” when the connection with a remote session was broken the desktop session was held open and accessible to other people.

The new version is more secure and better than the feature in SMS 2003.

Left out because of earlier blogs:

System Center stuff coming up on our YouTube channel

Managing device drivers when deploying Windows XP, Windows Vista or Windows 7 in your environment is always a lot…