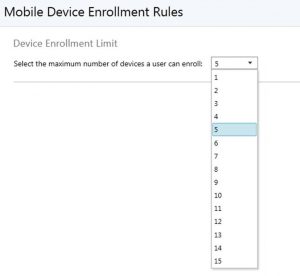 During the July update of the Intune service some really nice new features will be released. Announced in the what’s new docs for July is the ability to enroll up to 15 devices per user, earlier this was 5 devices. Great for testing and great for people who are living the mobility world to the max 😉 Looking at one of my tenants this is already available.

But there is more to come;

Enrollment experience is improved when using Conditional Access for Windows 8.1 and Windows 10 (Desktop and Mobile).

Changes to Device Enrollment Managers (DEM) accounts in the iOS Company Portal app, the DEM cannot see the enrolled devices anymore in the My Devices pane of the Company Portal app. Remote actions can only be done from the Intune Management Console.

In August Microsoft will be starting to implement the new group management experience that is using the Azure AD security groups instead of the Intune groups. This means that you are able to deploy apps, policies and profiles directly to Azure AD groups, which is really great!

– Support for iOS 7.x and lower

– Intune viewers will be replaced for RMS Sharing app.