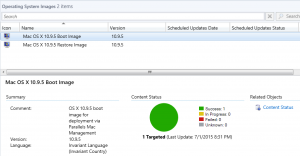 This blog will highlight the new version and the features. A major enhancement is that the OS Deployment of Mac OS X images is enhanced and better streamlined.

This new version has the ability to automate OS Deployment tasks in the Task Sequence and do for instance the following;

After adding the images a task sequence can be created and tasks can be added, like mentioned in the intro you are now able to set a computer name during the imaging process. A big plus since 3.5 did not support that yet. Same counts for installing apps from the Task Sequence, installing the Parallels Client and joining the Mac to the Active Directory domain.

With this version you are able to deploy customized Mac OS X images with less interference from the administrator or the OSD support departement which is pretty cool if you ask me.

If you want to read earlier blogs about Mac OS X and Configuration Manager, follow this link: http://ref.ms/macblogs

Intune, ADFS and Windows Phone 8.1 may cause issues

MMS sessions available and MMS is getting sold out!

As promised in part 5 of the blog series about “Citrix XenApp 6.5 integration with Configuration Manager 2012”…

Yesterday the ConfigMgr Product Group released ConfigMgr Current Branch 1610 to the fast channel. As part of this…