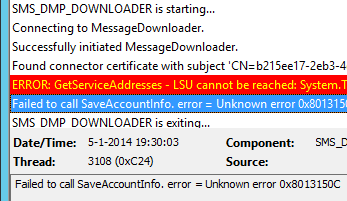 Same behavior was for newly applications deployed to the collection with all the Windows Intune enabled users. The deployed application did not became available in the Company Portal after logging on.

After some troubleshooting I noticed that for some reason the Connector was not able to reach the Windows Intune service and logged the following errors in the dmpdownloader.log files.

ERROR: GetServiceAddresses – LSU cannot be reached: System.TimeoutException: The request channel timed out while waiting for a reply after 00:04:47.5937516.

Restarting the component or the server did not resolve the timeout and the SaveAccountInfo error. The fix / workaround was removing the Windows Intune Connector site role and reinstalling it again. After this action, all enrolled devices became visable in the Configuration Manager 2012 R2 Console and the newly deployed applications became available in the Company Portal.

Be sure to redistribute the deployed applications to the manage.microsoft.com Windows Intune Distribution Point. Redistributing an Application can be done as follows:

Now that the Windows Intune connector is up and running again I will be looking at the next blog in the Managing Android via ConfigMrg and Windows Intune blog series. (as promised)

I will also have al look why this issue occurred and report back if I know the reason.

ConfigMgrBlog.com, the figures of 2013

ConfigMgr Hackaton at the MVP Summit 2015