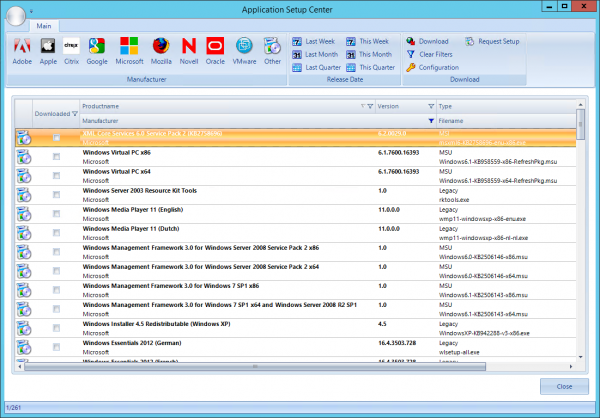 Getting the latest version of applications like mentioned above can be a real hassle, the Application Setup Center is able to help you finding the right version of the application that you need. Search on Manufacturer Name, Product Name, Version Number, Setup Type, the Date on which the setup has been added to the Center or File Name of the application and download it from the Internet from within the console.

Downloading an application from the internet via the Application Setup Center

After downloading you are able to easily create an, by Setup Commander tuned, Application in Configuration Manager 2012. Life becomes easy!
Next to the Application Setup Center, Setup Commander 0.9.9 adds also installer support for several applications and other stuff. Have a look for a complete list here: http://www.setupcommander.com/index.php/support/topic/7-setup-commander-099

Earlier blogs on Setup Commander can be found below this blog.